Pharah is easy to play hero and can be a brutal counter to certain heroes within overwatch. There are few heroes who are strong Pharah counters. Since her general strategy is to fly in the air and do tons of damage, she can also be played from the ground launching rockets into the enemy with great effect. Thier are a couple who come to mind when you think of Pharah Counters. Soldier 76 is one of the few who can show pharah out of sky very easily, making him one of the best pharah counters.

Pharah greatest strength in overwatch is her jump jet. This Ability grants her access to routes and areas other heroes can’t reach, giving her a variety of flanking positions. When in danger, it can be used as a quick escape, similar to Tracer and her recall ability.

This same strength can also be her weakness as well. Pharah’s weakness is how slow she moves while in the air. This makes it easy for heroes who can hit her while she is flying a good counter, such as McCree, Soldier: 76, Widowmaker, Bastion, and Roadhog. This Heroes can easily shot pharah out of the air given the chance, with or without their ultimate ability. 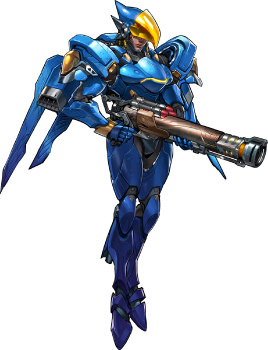