Hanzo is considered a tough defense hero to play, That combined with strong Hanzo Hero Counters that take advantage of his weaknesses very easily. Since the general strategy for Hanzo is to hang back and throw of arrows, combined with climbing walls for good positions that allow for even better damage output. For the most part, Hanzo Hero Counters tend to be heroes who can get face to face with Hanzo. Hanzo Counters are heroes who have some form of Crowd Control or CC and those with high mobility/gap close abilities. Winston, Genji and even Tracer are among the best Hanzo Counters available in overwatch.

Hanzo has a high amount of burst damage at close range to mid range. A single well-placed arrow from the Storm Bow, combined with a quick melee attack, can instantly kill most offensive heroes such as Tracer and Soldier 76. Scatter Shot can instantly one most squishy targets and deal lots of damage to Tank Heroes like Reinhardt and Roadhog.

Hanzo can shoot an arrow straight up into the sky and it’ll come back down exactly 20 sec later. So you can time Sonic Arrows on defense and have 2 up by the time enemies spawn opens up. The trick is to set this arrows up right in front of the enemy spawn doors. 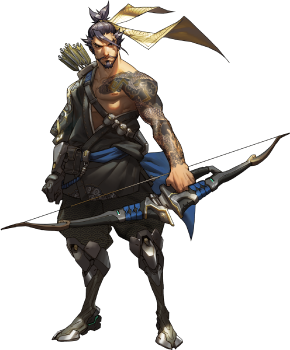