The Game Invite Notification is a League of Legends Season Reward Invite Badge based on the highest Tier/Ranking you’ve achieved at the end of the season.

When you send a Invite/Friend Request to another player on the league of legends client, That player will see your Invite notification with a Badge/Flair displaying your Ranked Rating from last season. 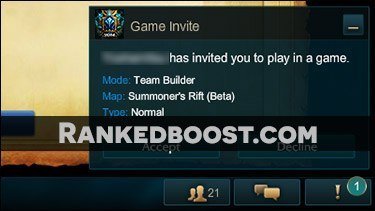 (Example: If you achieved Diamond Ranking during Season 6 then your Friend Requests/Invites that you send to other players will show a Diamond Flair/Badge to the player who is receiving the Friend Request/Invites.)

How Do I Get The Game Invite Notification Flair?

League of Legends Ranking/Tiers that are eligible for the Game Invite badge are as follows: Gold • Platinum • Diamond • Master • Challenger

The badge is given to players who have reached any of the mentioned ranked ratings before the end of season.

When Do I Get My Game Invite/Friend Request Season Reward Flair?

2017 Season 7 Ends in December and you can expect to have your 2017 Season 7 Rewards unlocked by the end of November.