Icons are used to customize your profile, usually reflecting your favorite characters or blizzard games. Most of which will be promotions from other games such as the Diablo 20th Anniversary event. The Player Icon Season Rewards will be visually different depending on the rank earned at the end of the season.

The Player Icon Season 5 Rewards will be awarded to players with Competitive Play Rating at the end of the season.

Unlocked by reaching top 500 at any point during a specific season in Competitive Play. 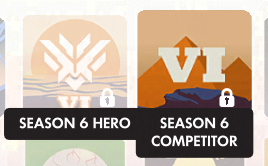 Unlocked by achieving top 500 ranking during a Season Competitive Play.

These are exclusive to players who participated in previous Seasons of competitive Play and are no longer available. Players can also earn icons from limited time promotions and from other Blizzard game during events.

This cosmetic is an exclusive and limited edition Player Icon Season Rewards, This will only be unlockable through Overwatch Season Rewards.  It will make your Icon a rarity among over 200+ that are currently available. As mentioned above it will be visible to other players who view your account profile.

The Competitive Season is expected to last 2-3 month. Blizzard has mentioned this is subject to change, however, it’s still sitting at 2-3 month for the time being. This means you will have around 2-3 months to unlock the Overwatch Player Icon Rewards.