Pokemon Sword and Shield How To Check IV’s | IV Judge

How To Check IV’s

Now to check your Pokemon’s IV’s you will need to do a few things first.

What Are IV’s?
Individual Value (IV) is a unique value that each Pokemon has each stat has an IV which fluctuates and determines the highest possible value for each stat. Each stat, such as Attack, has an individual value assigned to it from 0 to 31. It is random and technically cannot be changed.

How To Change IV’s
Individual Values technically cannot be changed, but you can alter them by Hyper Training while in the Battle Tower speak to the NPC on the far right of the counter pay one Bottle Cap to Hyper Train a single stat of a level 100 Pokemon to be considered Best you can also pay with a Gold Bottle Cap to Hyper Train all the stats for that Pokemon the reason why you technically cannot change a Pokemon IV is that when breeding the IV’s will not pass down. 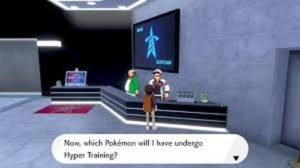 How To Read IV Judge Statements
After you have unlocked the IV Checker, you can see the judgment of your Pokemon stats below you will see what they mean.

How To Pass Down IV’s

There are a few ways to pass down the Pokemon’s IV stats to an egg when breeding.

The other way is Power items which can pass down a specific IV from a Pokemon the vendor is located in Hammerlocke City Pokemon Center here is a list of the power items and what they do.