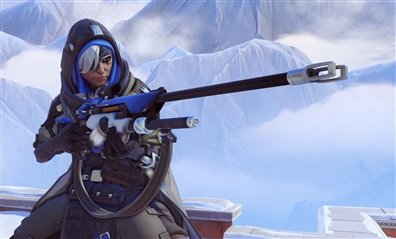 Ana is the new support hero coming to Overwatch. She has the unique ability to assist ally through a sniper scope. Below is the weapon blueprint image of her sniper, which in the Overwatch lore is helped design by Torbjorn. We also have included a Ana Guide on how to play her effectively and some of the Strongest Ana Counters.

Ana’s rifle shoots darts that can restore health to her allies or deal ongoing damage to her enemies. She can use the rifle’s scope to zoom in on targets and make highly accurate shots.

Ana fires a dart from her sidearm, rendering an enemy unconscious (though any damage will rouse them).

Ana tosses a biotic bomb that deals damage to enemies and heals allies in a small area of effect. Affected allies briefly receive increased healing from all sources, while enemies caught in the blast cannot be healed for a few moments.

After Ana hits one of her allies with a combat boost, they temporarily move faster, deal more damage, and take less damage from enemies’ attacks. The New Overwatch Hero appears to be a support that in many ways can be difficult to play due to her sniper weapon. There is a good chance since she will be able to support from outside the fight, that she will have a much easier time staying alive as a support hero in Overwatch.

When more details about this new support hero are released, this page will be up-to-date with tips & Tricks. Along with general strategies for making the most out of her full ability kit and of course an easy to follow how to play Ana Guide.

At the moment it looks like she will be available on the PTR realm then soon after she will be live for players to enjoy. Be sure to BookMark this page as we will update it as soon as she becomes available to test play.

It’s safe to say Widowmaker is the potential to be among the best Ana Counters in Overwatch. Since there are both snipers they will also share a lot of the same hero counters, Genji, Winston, D.Va are most likely some strong Ana Counters.

Keep in mind depending on her full ability kit, she could very well be the counter to widowmaker. Be sure to bookmark this page as we will keep it up-to-date with any new information regarding Overwatch’s Newest Support Hero.

Have a look at the Best Heroes in every role for competitive play!

You can also check out what rewards your expected to earn this season in competitive play.