If you are unfamiliar with how nemesis draft works we will explain: 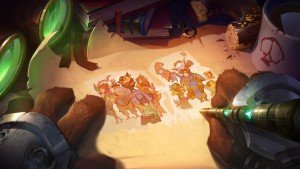 Nemesis Tier List of the Best & Worst Champion Picks available in the Nemesis Draft Game Mode. Ranked from S-Tier having the Strongest Champions, while F-Tier will host some of the Weakest.

S-Tier = The Best Champions in Nemesis Draft and League of Legends in general. (DO NOT give any of these champions to your opponent)

F-Tier = Worst Champions in Nemesis Draft. (These are the champions you want to draft for your opponent so they are weak in game)

What You Will Find In The Lower Tiers Of The Nemesis Tier List: F – E – D

There are two highly favored Strategies in the Nemesis Draft Game Mode:

It’s a simple one and can be effective if the enemy team does decide to not use the jungle. As long as you don’t pick any type of jungle champion the enemy team will not be able to jungle.

This means you will get more jungle camps to clear, or at the very least you will verse a weak enemy jungler.

ALL ATTACK DAMAGE (AD) -Or- ALL ABILITY POWER (AP)

If the enemy team only has one type of damage wither its AD or AP. Your team will be able to itemize a lot easier in game.