Welcome Summoners to the Hexakill Tier List. The Best Hexakill Champion Pick Guide for the Twisted Treeline 6v6 Game Mode. There are a few different strategies players will use, however players are not limited to these. With there being so many champion picks on such a small map, Snowball champions tend to be favored in this hexakill tier list. There also those who can abuse the size of the map, like Rek’Sai who can tunnel threw many of the walls in TT. Even though every player has access to a hextech sweeper early on, champions like teemo are still very annoying to deal with. Lets get into what make this game mode awesome. First will start with a quick guide on lane phase in 6v6 twisted treeline, then a tier list of the best hexakill champions.

Hexakill Tier List guide of the Best Champion Picks available in the 6v6 Twisted Treeline Game-Type. Ranked from S-Tier having the Strongest Champions, while F-Tier will host some of the Weakest. 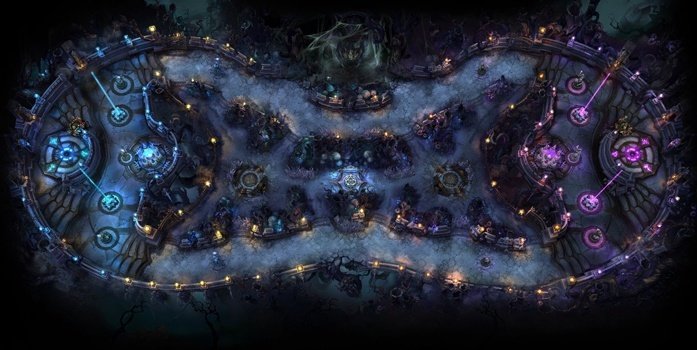 What You Will Find In The Higher Tiers Of The Hexakill Tier List: S – A – B

The Best Hexakill Champions are already some of the best champions for 3v3. Healers with Damage or CC will always have place in these featured game types. Alistar, Nidalee, Sona are all very strong champions for your team. Your team will need damage, some of the best Hexakill Champion picks like Katarina, Fiddlesticks and Sivir will be required. Don’t forget your Junglers who will get you snowballing, Reksai, and even Maokai. These two junglers are ranked among the highest, due to their ability to grant vision on a map with no wards available. Rek’Sai when burrowed can provide lots of vision for her team, Maokai can use (E) sapling toss over walls and place them in areas.

Players are not limited to this meta, you can play any way you see fit. This is just a Hexakill Tier List quick guide to help you get started.

On top of using tanky hexakill champions in the top lane, they will opt to buy a Relic Shield early on.

The best Hexakill Champs in the jungle can be either, Strong Gankers or Excellent Counter Junglers. Shaco is fairly good thanks to his ganks being strong, as well his boxes having strong counter jungle pressure.

To name a few strong jungle picks, Ekko, Gragas, Rek’Sai, Zac. These champions are really effective mostly due to there AOE CC Gank.

Since Bot Lane is positioned more closely to the tower, this is where you will want your carry’s.

The Best Hexakill Champs that will most likely be banned, Fiddlesticks, Azir, Katarina. You may also want to have at least one strong ADC in the bot lane, like Sivir or even Jhin.

It’s A Small World
These Hexakill tier list Champs can travel through almost all of the walls in twisted treeline, in some cases make great use of the tight spaces within this map. They are not only seen as the best hexakill champions, but in regular 3v3 Twisted Treeline as well. This increases their overall value within the Hexakill Tier List. These champions should make it their mission to roam and gank over walls. Since they have early on a huge advantage, that will not be as impact full later on in the game.
Rek’Sai • Lissandra • Zac • Fiddlesticks • Poppy • Anivia • Bard • Azir

6v6 Twisted Treeline has changed a lot, mainly due to the Vilemaw buff. You team will need to keep a close eye on it, since some the Best Hexakill Champions can solo it early on. Vilemaw is an easy buff to grab if go about it the right way. Players who are too close (Such as Melee Champions) will take increased Claw Damage, while ranged ADC targets only gets hit by vilemaw web attack. This is also why in this Hexakill Tier List, some of the best hexakill champion picks are ADC.

If you’re trying to end the game, then vilemaw is the key. These powered up minions will push the game to victory.