Welcome to our Warcraft 3 Reforged Undead Guide, a complete list of all Undead Units, Buildings and Heroes Ranked from Best to Worst in WC3. Along with Unit Stats, Hero Stats we have visual guides from the battle net website that help explain what units come from what buildings. The tech tree is shown and what buildings you need to build the next upgrade, this is everything you need to know to get you started with the undead race in WC3. What we consider to be Warcraft 3 Reforged Best Undead Heroes, mostly based on the overall strength and use within all unit builds players are using. Death Knight is the Best thanks to having to Heals with from Death Coil and the other Death Pact if that wasn’t enough his 3rd ability is an aura that grants Movement Speed and Life Regeneration. This makes it a hard hero to kill, which allows for better matchups no matter what you come across.

Our Warcraft 3 Reforged Undead Units List has every stats you should know about, like Gold and Lumber Cost among many other useful stats. Other important stats for units to consider is Attack Range and Movement Speed since these will allows you to kite the enemy or even catch fleeing players. Clicking/Tap the Links below you can learn more in-depth information about their abilities and a complete list of the Units Stats.

(The image below is from the classic battle net website, Using this you can visually see what buildings make what units.) This Warcraft 3 Undead Building Guide details each structures Gold and Lumber Cost, along with any other stats that might be considered useful. For example, the undead race has a couple of buildings which can attack enemy units, your main base Necropolis and its upgrades can attack enemy units nearby it. Similar to Orc the undead can use their Farms/Ziggurat as an attack tower, but with 2 upgrades that can be done later to further increase their damage.

(The image below is from the classic battle net website, this image is of the Undead Race Tech Tree. Using this you can visually see what building requirements are needed to unlock new buildings.) 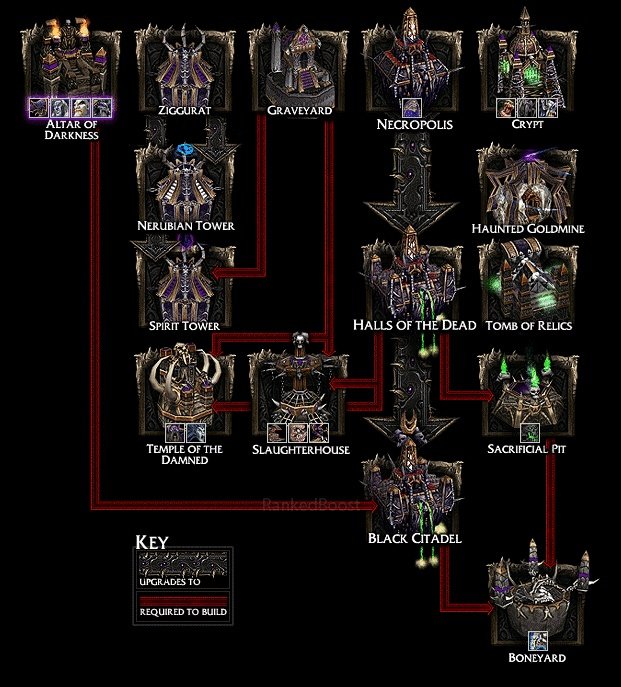 How To Play Undead Race in Warcraft 3 Reforged

What you need to know so you understand How To Play Undead Race in Warcraft 3 Reforged, this will focus what makes Undead strong and what is unique to their race that others cannot do.

Strengths – List of Strengths that help the Undead Race Win.

Weaknesses – List of Weaknesses that cause the Undead Race To Lose.