This Trials of Mana Angela Guide of all the available Classes for this character and what we consider to be the Best Class for Angela. This character uses Wands weapons, which has a Ranged magic & mass targeting spells. 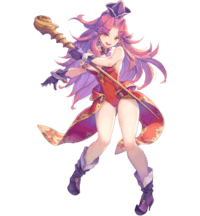 Angela is the only daughter of the True Queen of Altena, the snow-covered kingdom of magicians. Because Angela’s mother hardly spent any time with her as a child, the princess was prone to act out to get attention, wearing gaudy clothes and playing pranks on people in the castle. Despite this, her love for her mother runs deep. Angela never got the hang of casting magic spells, a problem that plagues her to this day.

Best Class for Angela in Trials of Mana

This is a complete list of all the Classes for Angela, below this table you will find what we consider to be the Best Class for Angela in Trials of Mana. Before you reach your Advanced Classes (Tier 4) you will spend most of your time in the Tier 3 Classes, we consider the Rune Seer Class to be the strongest choice at that Tier.

List of the Best Weapon, Shield, Armor, Headgear and Accessory for Angela in Trials of Mana Remake.