Welcome to our Pokemon Sun and Moon Ultra Beast Pokedex, Stats and Types of each Ultra Beast is included. As soon as more information becomes available we will explain how to capture Ultra Beast and their Locations.

The New Pokemon Sun and Moon Ultra Beast Pokemon are believed to possess amazing power. The lore regarding these Ultra Beasts foretells the ability to threaten both Human civilization and other Pokemon and their habitats. The Aether Foundation is dedicated to the research of these Ultra Beast and have Code Names for them.

If you are new to the Pokemon Franchise, I’ll explain how the stats work. This will help you better understand the Pokemon Sun and Moon Ultra Beast Pokemon Strengths and Weaknesses.

This one is easy to understand it simply refers to how much Health Points the Mon has.

ATK also known as Attack, partly determine how much Physical damage the mon can do.

The Defense Stat also partly determines how much damage a mon will receive from physical attacks.

Speed will affect how fast your mon can attack in battle, in other words, the pokemon with more SPD/Speed will attack first.

Similar to ATK your SPA/Special Attack determines how much damage you do with Special Moves.

Similar to Defense your SPD/Special Defense will also determine how much damage you take when hit by Special Moves. 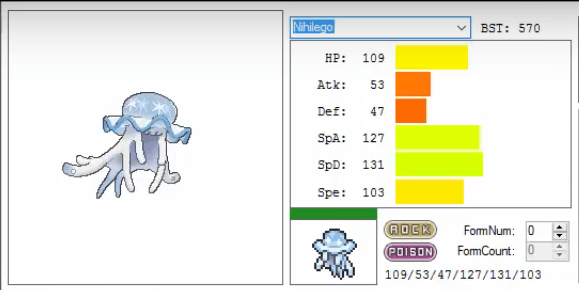 AKA the UB-02 Absorption Pokemon Sun and Moon Ultra Beast. Easily identifiable as a bug type resembling a cross between a mosquito and a very buff body builder. 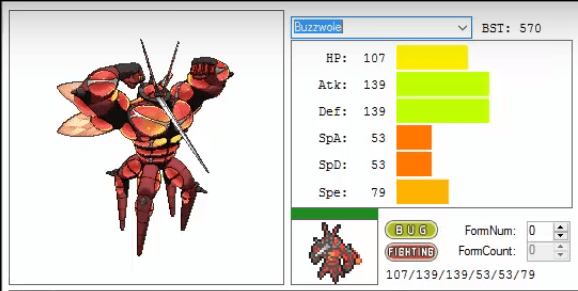 Code named UB-02 Beauty Pokemon Sun and Moon Ultra Beast. However, don’t let this Pokemon’s looks fool you. Pheromosa has glass cannon type stats along with being an another fighting/bug type.

Xurkitree is one of the few Pokemon Sun and Moon Ultra Beast with only one type. The most notable thing about this Pokemon is its insanely high Speical Attack Stat (SPA).

Celesteela is a Pokemon Sun and Moon Ultra Beast with a nice double type of Steeling and Flying. Well, rounded stats, with no major stats to speak of. 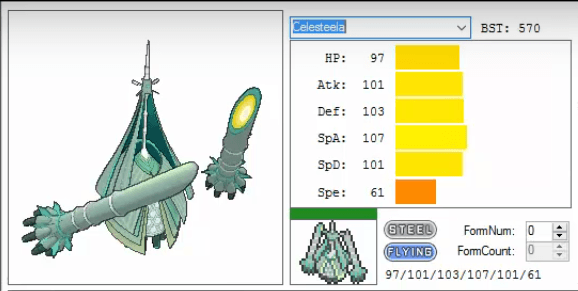 Karatana is a unusual type pairing of Grass/Steel, what even more interesting is this Pokemon sun and moon ultra beast is the perfect example of a Glass Cannon.

Most likely to be a favorite among Pokemon Sun & Moon Players, Guzzlord is a Dark and Dragon type with huge HP Stats. This Pokemon only weakness aside from its low SPD Stat would likely be a strong Fairy type.

Necrozma is the last of our Pokemon Sun & Moon Ultra Beast within this List. Psychic only type, along with not having a Beast Boost ability. This Pokemon has well-rounded stats nothing found within the extremes like our previous Ultra beast Pokemon. 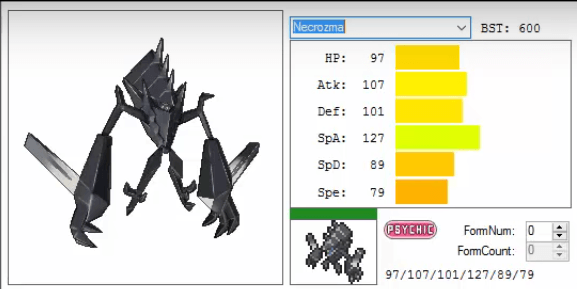 Easy To Follow Evolution Chart For Sun and Moon: