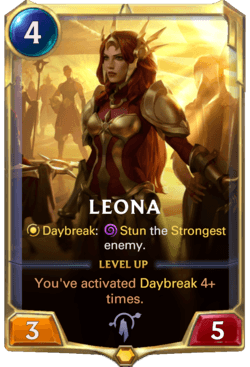 Since many of these cards are found within Targon and other regions within runeterra. You may find this our Call of Mountain Set 3 Page Helpfull.

The LoR Best Daybreak Deck Builds List, will list the most popular and meta deck builds that use the Daybreak card effect. Currently, there is only one champion with this effect, and that is Leona. This card effect combo nicely with the Invoke effect found on other cards from the set.

You can Click/Tap any card you see to view more information.

The Invoke Daybreak/Nightfall Deck Build is one of the Best LoR Deck Builds. This deck uses Targon, Freljord Cards and Leona, Braum as its champions, it also has 27 Units and 7 Spell Cards. In total thats 5 Common, 8 Rare, 1 Epic and 6 Champions. It will cost 28900 Shards to build this deck.

You can view other Best Deck Build Playstyles by Clicking/Tapping the Links below.

You can view other Regions and their Best Deck Builds by Clicking/Tapping the Links below.