League of Legends Players who are interested in playing Ranked Mode in TFT will be most familiar with this Ranked Game Mode. For those who are not, we will explain everything you need to know about Ranking up in Teamfight Tactics and earning ranked rewards.

First things first playing with your friends in Ranked TFT will work a little different then the normal ranked modes of league. Lucky for us Riot made a handy chart to showcase how the Ranked Party Restrictions will work. 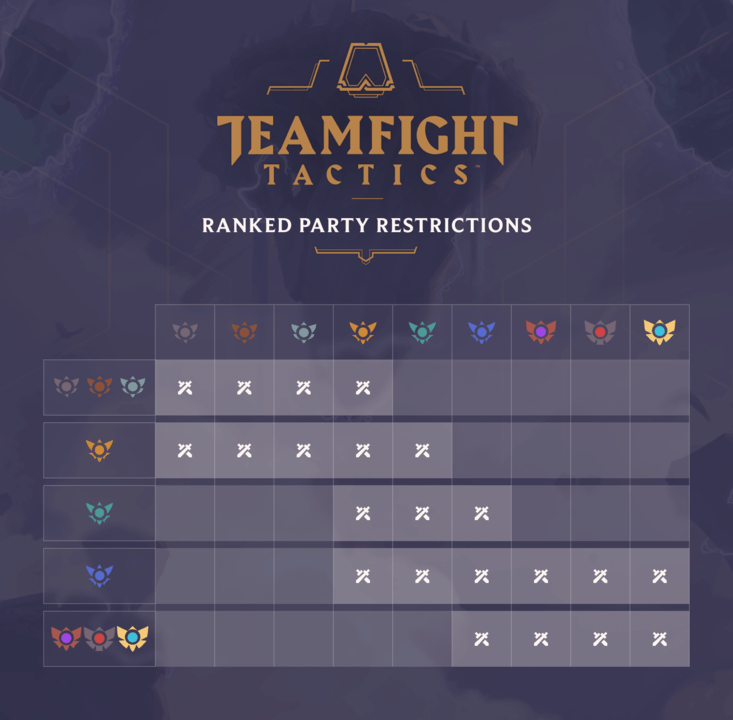 If you are still unsure who you can play with, then this section should make it a little easier to understand who you can queue up with based on your current ranking in TFT.

The Teamfight Tactics Ranked Rewards will be similar to the regular season ranked rewards and are expected to be given out at the end of the season. You will probably have a lot of question like when does the season end and how long will a season last? we will do our best to answer these question below based on the information that is available from Riots Dev Blogs.

Q: When Does TFT Season Start?

A: Expected to Last 3 Months, similar to the regular seasons of league.

Q: Will there be TFT Season Rewards?

A: Yes, and players are expected to receive them at the end of each 3 Month Season.

Q: What are the TFT Season Rewards?

A: RIOT has yet to announce the Ranked Rewards for Teamfight Tactics.

Q: Will there be Ranked Promotional Matches in TFT?

Q: Will my TFT Ranking soft-reset at the end of the Season?

A: Yes, similar to regular league rankings your TFT ranking will be soft-reset at the end of the season and will need to rank back up.

Did You Know We Have Complete Items List Cheat Sheet Guide?