Welcome to our Injustice 2 Villains List, here you can view specifically the Villains of the Injustice Universe and their story within it. 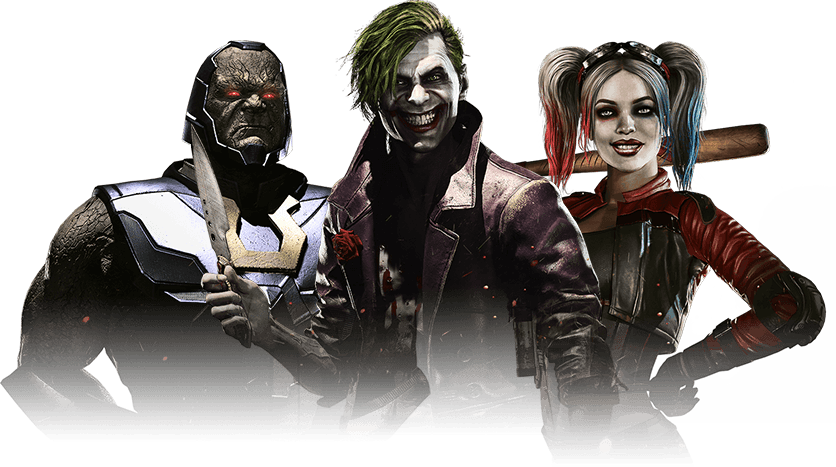 Villains are known to be Evil malicious characters who are devoted to wickedness and bring trouble, damage, and harm to others.

The storyline is set within an alternate version of the Justice League’s universe. In this reality, Superman becomes a tyrant and establishes a new world order after the Joker tricks him into killing Lois Lane and destroying Metropolis with a nuclear bomb. In an effort to stop this, Batman summons counterparts of the League’s members from another universe, including his own and Superman’s, to join his insurgency and end the totalitarian regime.

“OUR HELLISH HATE WILL BURN YOU ALL!”

Red Lantern Atrocitus seeks revenge against all members of the Sinestro Corps for their murderous oppression of his homeworld. His hate blazes a path across the galaxy leading him to Earth. Sensing an opportunity on the post Regime planet, Atrocitus focuses on bolstering the Red Lanterns ranks by stoking the flames of rage.

“HATE IS THE PERENNIAL MOTIVATOR.”

After Superman’s defeat, Bane was betrayed by the Regime and relentlessly pursued by Batman. Having already spent most of his life in prison, he is determined to take revenge against his former Regime masters and turn Gotham into a city where his rule is law.

“GOOD AND EVIL ARE NOT CONSTANTS. THEY ARE DEFINED BY THOSE WITH POWER.”

After the fall of the Regime, Black Adam returned to his home defeated and humiliated. Staying hidden from Batman’s watchful eye, Kahndaq has become a safe haven for the Regime’s remnants. There they await the day that together they can restore the Regime's rule upon the world.

“SUCH FOLLY AND FUTILITY IN THE GRAND DESIGN.”

Brainiac is a megalomaniacal genius who roams the universe, collecting knowledge to increase his intellectual and scientific prowess. Obsessed with establishing his superiority, Brainiac captured Krypton’s greatest cities, then eradicated what remained…or so he thought. Tales of the “Last Son of Krypton” have reached far into the stars. Now, the Collector of Worlds comes to Earth to finish his accumulation of Krypton -- and discovers a new world worthy of his collection.

Sworn to ending all crime, the Regime hunted down and brutally executed every member of the Rogues, including Captain Cold’s sister. Using his skills as a thief and his iconic Cold Gun, Cold now seeks his vengeance. He’ll gladly use the Society to achieve it.

“I'VE GOT NINE LIVES, I'M ONLY A TRAITOR IN MOST OF THEM.”

Consistently walking the line between hero and villain, Selina Kyle's pilfering past as Catwoman prevents Batman from ever placing his full trust in her. As the ashes of the Regime give rise to the sinister Society, the Caped Crusader must once again speculate where this thieving feline's loyalties lie.

When archaeologist Barbara Ann Minerva betrayed Wonder Woman to claim the powers of a god, she was unaware that she would be cursed to live a life transformed as the Cheetah. She now uses her primal powers to take revenge against Wonder Woman, drawing her out of hiding in hopes of bringing about her doom.

Floyd Lawton is “the” human arsenal, his aim lethal from any range. Having escaped imprisonment during the Regime, he now enters the fray as an expert assassin for hire, forced to contend with the fact that Grodd has come into possession of the detonator to the Personal Explosive Device implanted in his head.

Telepathic brute, Gorilla Grodd, has long sought to prove his peerless genius by subjugating mankind. He’s gone so far as to form an anti-Justice League, the Society, to once and for all smash their opposition. Using his intellect and telepathy Grodd enlists others in his mission to conquer the planet and fill void of power left by Superman’s Regime.

Though killed by Superman, The Joker continues to haunt the lives of all those touched by his madness. By destroying Metropolis, he set the events in motion which made enemies of Superman and Batman. If he were alive to see the chaos he’d created, he would surely be smiling.

“I HAVE NO MORE FRIENDS, ALL I HAVE IS THE GREEN.”

Dr. Pamela Isley was once an innovative, radical botanical biochemist with a singular goal: make the world safe for plant life to flourish. She joins the Society to further their common interest in bringing mankind to its knees, but at heart, Ivy’s desire is to ensure that in any new world order, flora dominates fauna.

“EVERYONE HAS SOMETHING TO FEAR.”

Scarecrow plays on the fears of the unknown to inflict terror on his victims. An anarchist obsessed with using chemistry and psychology to spread and study fear. He joins the Society in order to sow panic on a global scale.