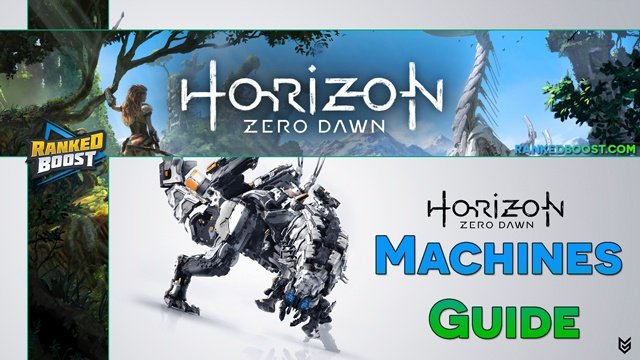 To start this off right there is a video from the folks at GamesRadar visually showing you how to take down Horizon Zero Dawn Machines.

List of All Machines In Horizon Zero Dawn Enemies, along with a small explanation about their abilities and the Best way to Destroy them.

You Can quickly Navigate using These Shortcuts:

Although they will usually flee when attacked by prowling hunters, grazers may retaliate and face their foes once they pinpoint them, ramming and using their antlers while on the offense.

How To Destroy Grazers: The Best Way to kill grazers is to lure them with a whistle in the tall grass, once close enough you can strike them with one good strike taking them down.

The Stormbird is a highly mobile flying creature that can rain electric attacks down from above. While hovering in mid-air, the Stormbird can shoot a Shock Blast of condensed lightning. The machine is still deadly while perched on the ground. It can use its peak for a powerful Beak Smash and can leap at Aloy with its claws. It can also utilize it’s long tail in a sweeping Tail Lash attack while grounded.

Special Ability: Thunder Crash – While airborne, the Stormbird charges up electrical energy in a shield around its body. Once fully charged, the machine performs a dive bomb to the ground, releasing its charge and causing massive damage near it’s vicinity.

How To Take Down A Strombird: Using Tear Blast Arrows will remove some of its armor making it easier to target its Frost cannon on its chest.

It also has Two Weak Spot Canisters on each side of its neck you can target to deal large amounts of damage.

Shock Bombs can stun the Stormbird giving you destroy the Orange Canister on its wings to make sure it can fly back into the air.

These Creatures have super fast close range attacks and its best to keep your distance. They also have a cannon mounted on their sides to attack you from afar, you are able to shot off the cannon you can pick it up and use it yourself.

How To Kill A Ravager: The Ravager has a couple of weaknesses.

These Horizon Zero Dawn Robots are known as Freeze bellowbacks. They will use frost damage attacks instead fire like their fire counterparts. Frost will increase the damage you take from other sources, this is one of the main reasons this monster is difficult to deal with when facing multiple enemies.

How To Kill A Freeze Bellowback: Using FIRE ATTACKS to deal more damage and be sure to attack the large container on it back whenever possible. It also has Glands on each side of its head, destroying these will reduce it overall damage when fighting it.

These Robots known as fire bellowbacks are very dangerous and can do a large amount of damage. They are best known for shooting fire out that stretches a long distance.

How To Kill A Fire Bellowback: Using ICE ATTACKS to freeze it will allow you to take out it cargo sack on it back that powers its flamethrower. It also has another weak spot located on its Belly/Stomach but is fairly difficult to reach.

The Horizon Zero Dawn Robot Machines Rockbreaker will travel underground and suddenly pop out to try and damage with its buzzsaws.

How To Kill A Rockbreaker: Freeze Attacks are effective at slowing it down, allowing to deal damage to its Diggin Arms. It also has a Weak Spot located on its Belly/Stomach but is slightly difficult to reach.

These Horizon Zero Dawn Robot Machines Behemoths tend to move in pairs and will require you to be dodge quite a bit when fighting them.

How To Take Down Behemoths: Using Tear Blast Arrows will remove their armor and allow you to attack the Weak Spots. This Weak Spot is a Yellow Cylinder located on there Stomach/Underbelly.

The Horizon Zero Dawn Machines Known as thunderjaws is armed with a variety of weapons. It can fire different types of energy emissions from its head, like an array of red laser beams or canons that shoot blue blasts of unknown matter. On its back, just above the legs, are a pair of artillery canons called disc launchers that can be shot apart and used against the Thunderjaw by the hunters. In addition, the thunderjaw can stomp its foes or whip them with its tail.

How To Defeat A ThunderJaw: Tear Blast Arrows are very effective against this Robot removing his armor. It will also help if you can shoot multiple arrows at once to increase your overall damage to the Thunder Jaw.

Its Weak Spot is a Bright Yellow Heart, which will require you to remove some of its armor before you can effectively damage it.

It also has Blaze Canisters on it back that you can target.

Horizon Zero Dawn Robots Corrupted Machines are pretty much the exact same thing you have versed of the regular version, except these corrupted machine versions are stronger being able to deal and take more damage. They will also drain your health if you stay near them for too long.

These Horizon Zero Dawn Machines appear intimidating due to their size and name. However, once you have learned their weaknesses they are fairly easy to deal with.

How To Destroy Deathbringer: The Horizon Zero Dawn Robot Deathbringer is WEAK AGAINST FIRE AND SHOCK DAMAGE. When damaged it will expose it Orange Weak Spots allowing to to get some good damage on it.

These are another enemy you will find early on, they can also be hacked using the override ability.

How To Destroy Striders: The Best Way to Take Down Striders is to shot the Blaze Canister located on their back.

The Horizon Zero Dawn Machines Watchers have the ability to observe and scan the environment in search for threats. This is a problem since they can alert other machines nearby, allowing you to be quickly out numbered.

Despite their lack of weaponry, Watchers can attack humans by charging and tackling them. They also can shot laser beams from their eyes.

How To Destroy Watchers: The best way to fight watchers is to SHOT the EYE since this is their weak spot.

The Horizon Zero Dawn Machines Red Eye Watchers have the ability to observe and scan the environment in search for threats. They are slightly stronger than their regular counterparts and are a bit more aggressive as well.

How To Fight Red Eye Watchers: The best way to fight the Red Eye Version of watchers is to SHOT the EYE since this is also their weak spot.

These Horizon Zero Dawn Machines Longlegs can stun you with an ability known as Sonic Blast, the other problem is they also have the ability to call for reinforcements.

How To Destroy LongLegs: The Best way to deal the most damage to Longlegs is to attack there “Lung Sacks” located on their chest. They also have blue canisters located on their hips that will also deal increased damage. Armor piercing arrows are also super effective versus these machines.

Glinthawks can lift the “corpses” of neutralized machines, most likely to dismantle them and reutilize their components. They also can shot down at you from the sky cause some extreme damage.

How To Destroy Glinthawks: These Horizon Zero Dawn Machines are VERY WEAK VERSUS FIRE DAMAGE, any fire weapon or ability you have will be effective against them. Aiming at their chest is also another weak point, they are also much easier to deal with the lower they are to the ground.

Walking on four long legs and displaying a long scorpion-like tail, their appearance is almost alien compared to other, more organic looking machines. They also spew grenades from the top of their body, along with its ability to throw rocks using its tail.

How To Destroy Corrupters: Destroying the Metal Cylinder on top of their body will reduce the risk when approaching these, also there are VERY WEAK VERSUS FIRE DAMAGE.

Like the name suggests these creatures will charge an enemy using their horns to ram you.

How To Destroy Chargers: Keeping your distance helps a lot while aiming for there Horns will help limit their ability to ram you.

These Horizon Zero Dawn Robots Tramplers will travel in herds aside from that they are not that difficult to handle.

How To Kill Tramplers: Be sure to shot their Horns to stop them from ramming you down and staggering you in the process. The Weak Spot for this beast is located on their belly and is quite easy to attack.

These Horizon Zero Dawn Machines can jump and attack with their claws, and protect themselves with a blue energy shield. Shell walkers carry crates on their backs and travel in packs to deliver their cargo.

How To Take Down A Shell-Walker: Disabling their claws will reduce a large amount fo the risk, also it best to sneak up behind them since they are very slow to begin with.

Stalkers are very punishing creature due to their ability to turn invisible and ambush you when you are least expecting it. What’s even worse is the tend to leave minds on the ground see keep your eye out for any red beams of light.

How To Destroy Stalkers: Firing Blast Arrow is a great way to disable their invisibility. Aiming for their Yellow Sections will deal the most damage versus this creatures.

Can be hacked. Physically, Broadheads are reminiscent of cattle, especially the Longhorn breed, displaying a pair of long, straight and horizontal horns likely used as a defense mean and tools.

How To Take Down A Broadhead: The Horizon Zero dawn Machines Broadheads have canisters located on their back which makes for an easy weak spot to attack. You can also use armor piercing arrows to break off its horns to prevent its charging ability.

Not many abilities are known aside the function they play in communications between machines. Tallnecks are able to temporarily, and involuntarily, stun machines once a human has gained access to their had dish and seized its data.

The Horizon Zero Dawn Machines Snapmaw can cover a lot of distance on the ground, leaping or charging forward with it’s powerful jaws. In close combat, Snapmaws utilize a coolant liquid stored inside their cryo sacs. They can attack from a distance using a Freeze Burst, shooting super-cooled liquid that can freeze their opponents.

How To Kill Snapmaw: Using Blast Arrows to remove their armor will help a lot. They are also WEAK AGAINST FIRE DAMAGE, you can also increase your fire this damage by attacking they’re the glands underneath their head, leaving them frostbitten.

The Snapmaw is apparently able to attack Aloy while she is swimming.

How To Take Down A Lancehorn: Since these lancehorn robots appear in packs it will best to lure them one by one into tall grass and hack or destroy them. Setting up Trap Mines is also a good strategy when dealing with many of them at once.

The Sawtooth is covered in an Armor plating on the majority of its body, and is concentrated on its torso.

How To Destroy Sawtooth: The Sawtooth has cannister like most Horizon Zero Dawn Machines, these, however, are located on his underbelly. Armor piercing arrows and traps work best versus the sawtooth machines.

They are attracted to destroyed machines similar to the Glinthawk. They also appear to roam in packs using pounce and laser attack abilities.

How To Kill Scrapper: Using Hard Point Arrows and Shock Weapons are effective, along with attack their weak spot located on the back.

You Can Purchase Horizon Zero Dawn On the PS4 At the Amazon Store. 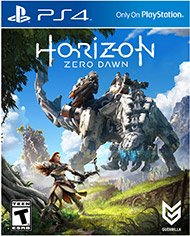