Here we give you a Arena Tier List providing the best hearthstone cards for each hero class. Each card is hand picked by our professional Hearthstone players based on how much value a card has for winning the game and creating strong combos.

Learn the current Hearthstone meta using our arena guides. Find the arena value in every card!

Select any class below to view the arena tier list.

Need help on how to play any of these hero classes? Receive great Coaching from Hearthstone Professionals

you want our pros to play arena for you, Try our Arena Key Boost! 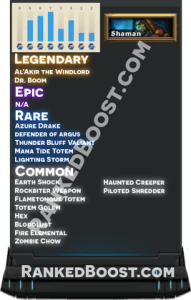 How to Choose the Right Card

Choosing the right card in Arena involves keeping in mind a few simple guidelines. Along with the help of a Tier List to put in perspective the value of a card within a Arena setting.

arena tier list Card Combos should be avoided in Arena Decks since the chance of it being used effectively is low. However there are exception to this.

Example of a Good Combo: Dark Iron Dwarf on drop give a friendly minion 2+ Attack is useful with almost any minion card in Hearthstone make it ideal card for any Arena Deck Draft.

Example if a Bad Combo: Shadow Step Return a friendly minion to your hand. The only way this card would not be a complete waste is if you somehow have and draw a card with a really strong Battle Cry. That’s if you were lucky enough to draft one in the Arena Deck Builder.

You want your Arena Deck to have a balance of Mana Cost Cards. This will help you insure every turn you have a card to play.

Generally in this arena tier list its a good idea to Pick High Cost Mana Cards At First, This will make it more easier to adjust your Mana Curve and balance your Mana Cost of your Arena Deck

As you start building your Arena Deck from the First 5-10 Cards you should have a Deck Theme is mind. If you happen to get a lot of strong Aggro Cards then the rest of your Arena Card choices should be focused more on a Aggro play style.

Weapon Cards are good for clearing the enemy’s board of minions at the cost of just one Card. However this arena tier list advantage is short lived since you can only use a weapon specific amount of times before it will break. On top of the Loss in Health from attacking minions just to clear the board.

I Recommend avoiding Secret Cards in Arena if possible since its very rare these type of Cards will have any real value for the arena tier list.

The Type of Spell Cards you DO want: Fireball – Swipe – Eviscerate – Truesilver Champion

The Type of Minion Cards you DO want: Mechanical Yeti – Piloted Shredder – Water Elemental – Fire Elemental – Druid of the Claw

Curse of Naxxarmas is Adventure Mode Expansion with 6 wings, all of which with the WoW Naxxaramas Raid Instance theme. Each wing will consist of several bosses, Class Specific Challenges and unlockable cards.

If Arena is not your thing arena tier list, there are other modes in hearthstone that are worth playing. Ranked Mode rewards players with monthly rewards such as more Cards and Card Back Skins.

Want to learn more about Hearthstone?