How to play him in lane

This garen build guide with go in depth with how to play, learn what starting items you will need and how to lane phase and through mid game with how you should play into late game. Runes Pages and Mastery pages along with a easy to follow Item Build and Skill Order Guide.

What makes you strong in lane

A bruiser type champion, meaning he has a short auto attack range which makes him Melee/Bruiser Champion. His play style is very simple making it one of the easiest League of legends champion to pick up and learn to play and your garen build can be slightly different. However due to the range of most of his spells and the lack of different item builds, This champion almost will always be played in top lane.

Fairly limited build paths in terms of damage, most of the Garen build paths will turn you into a Half Tank and Half DPS Champion. This is not a problem since he has high base damage spells and a excellent Ult that does large amounts of True Damage to enemys with low HP.

Since most of the time you will be building the Black Clever as a first item, this makes garen builds perfect as a anti Tank Counter Pick to most league of legends tank champions. 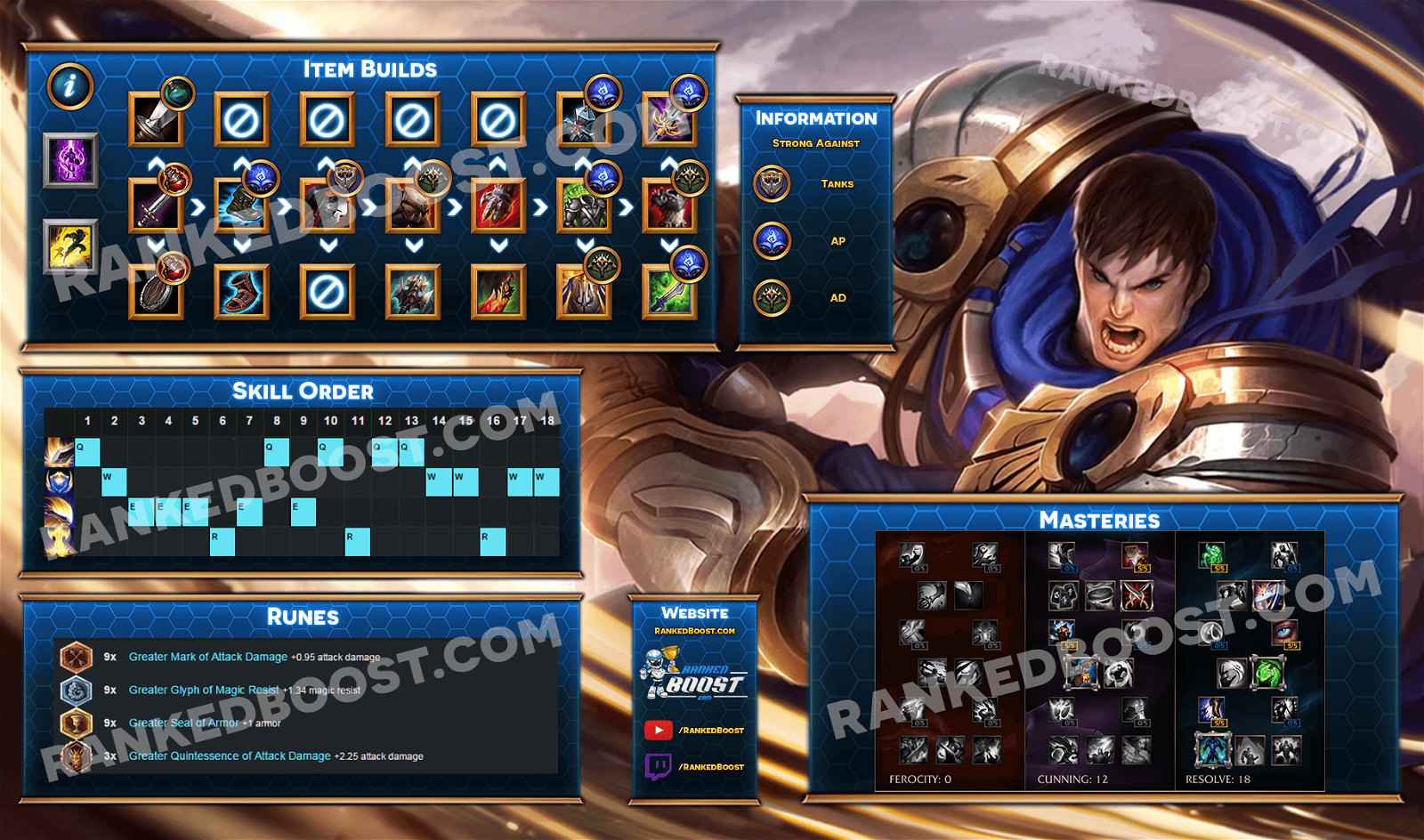 You will almost always go Dorans Sword and one HP Potion with this garen build, In rare cases when your enemy laner has a range advantage over you, will instead grab Boots and 3 HP Potions.

He’s a bully in lane for the most part and especially vs other Bruiser/Melee champions. You will Start with your Q for the catch, Then next you will want to activate your W for damage Reduction, then follow up with your E which is lots of extra damage is used for the full duration of the spin. A strong garen build can make him top lane a carry for his team, if the enemy does not have a lot of kite you will be able to carry.

Core item in all garen builds are most likely Black Clever, if more armor is needed during lane phase at first say versus Riven then go with Dead Mans Plate first item then Black Clever.

Your next item will be depends on what you need to provide for your team. If more damage is needed then Steraks Gage and Maw of Malmortius are a safe next item

If its Magic resist you need Spirit Visage has really good synergy with his passive heal. Need armor grab a Randuins Omen or even Thorn Mail

at this point in the game if you are winning your lane, you have two choices. With this garen build one you can punish your enemy laner and deny him as much as possible, two you can roam the map and look for a kill either on the enemy Jungler or Mid Lane and even the bot lane (only if you are running the Teleport summoner spell).

Make every most you do count once you go all in, Its really hard to get back out if things dont go as planned. If you are really tanky versus the enemy team, its a good idea to pick a target and zone them bully them out of the fight with your garen build like this. If you game plan is to do damage more then tank be sure to Peel for your AD or AP Carry, protect them from the enemy tanks and or carrys in team fights.