Ike Fire Emblem Heroes Is a legendary Hero and a great leader of the group labeled as the Greil Mercenaries. Only shortly after joining the group he became their leader after his father had passed away. His objective was the protect Crimea’s errant, the Princess Elincia in combatting the invasive forces of Daein. After winning the trust and respect of his allies throughout the Laguz and beorc nations.

Later on three years Ike Fire Emblem Heroes completed a job with the group called Bastian to save Lucia from becoming a victim to Ludeveck’s crude war. The mercenary group and he were then  hired by the Galia’s army to aid them in the war they had against Begnion. In this time he ran into conflict with Mocaiah of Daein.

Striving to live up to his father’s high reputation, he became an expert swordsman so that he may have the strnegth to avenge his father’s death by being agble to finally defeat and lay to rest the Black Knight 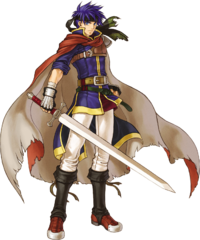